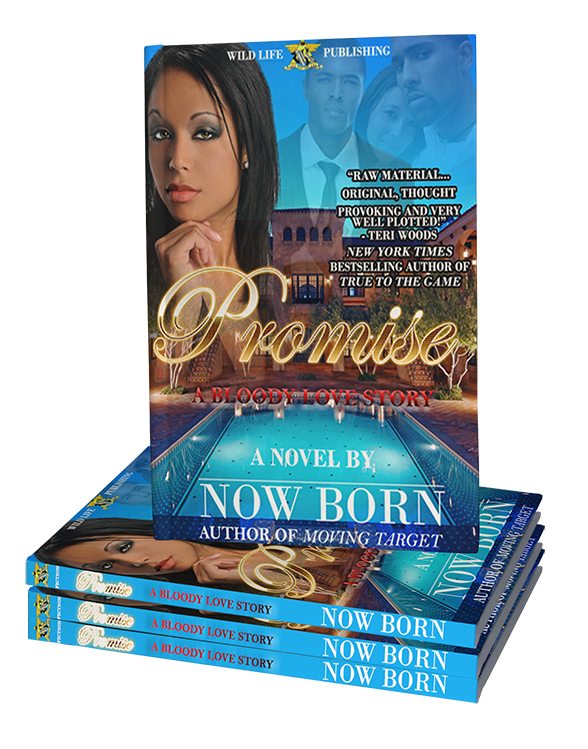 Promise: A Bloody Love Story by Now Born: Promise Heyward is a young black woman from Maryland’s infamous Prince George County, an only child to an early 70’s heroin dealer and his wife who was an aspiring writer. As an adolescent, Promise lost both of her parents to the dope game. She spent the remainder of her childhood living under the broken system known as foster care, only to learn just how lonely and complicated her life would be without her parents. As she became older, she evolved beautifully – a dime in the face with dangerous curves, and her sights were set on becoming successful. Given her beauty, coupled with the fact that she had such a troubled past; she is definitely a diamond in the rough. After enrolling in college to pursue a career as an author, Promise soon becomes involved with a ruthless Baltimore gangster by the name of Murda. They have a son together named Zaire, Promise’s crown jewel. Murda is notorious in the drug game, a rising kingpin, and his crime family has the streets of Baltimore under lock and key. Over time, Promise begins to realize that Murda’s material wealth and the luxurious lifestyle that she’s grown accustomed to are all that he has to offer her. All of the jewelry, cars and clothes are overshadowed by his lies, abuse, infidelity, material greed and neglect for her and Zaire. Finding herself entangled in Murda’s web of confusion, Promise finally decides to leave him. With the cards stacked against her, she is forced to struggle at first. That’s only until she meets a guy who fills that void in her heart and shows her what true love really feels like. Murda eventually realizes that he has lost a good thing but, by then, it’s far too late. He can’t accept the fact he’s been replaced and that another man is satisfying her. That’s when he starts doing anything and everything that he can think of to put an end to her new fling….. Even if it means that someone has to get hurt.

Be the first to review “Promise: A Bloody Love Story (Paperback)” Cancel reply